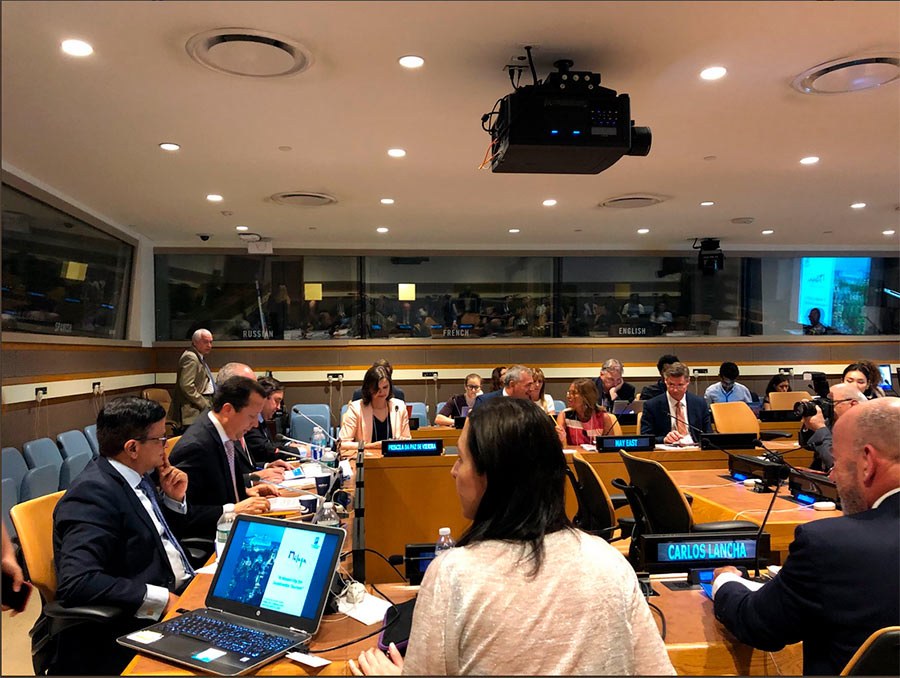 The CIFAL Madrid Centre is the only United Nations Road Safety Centre in the world. It is managed by RACE and has presented its road safety training plan for leaders and authorities at the High-Level Forum for Sustainable Development, an event held every year at the UN in New York. The event was organised by UNITAR, the United Nations Institute for Training and Research, as a way of exchanging good local practices in the achievement of the SDGs. At the event, RACE had the opportunity to show the results of the Certificate Course in Road Safety, a Private Degree offered in collaboration with Universidad Europea de Madrid (UEM), for which 18 professionals from six nationalities have received training. It also presented the new e-learning programme for users, designed to lower the risk of traffic accidents.

The main theme this year of the High-Level Political Forum on Sustainable Development, which was held at the UN headquarters in New York from 9 to 18 July, was “Transformation towards Sustainable and Resilient Societies”. The global meeting reviews progress on the Sustainable Development Goals (SDGs) and examines compliance by countries with the 2030 Agenda. It meets every year to share experiences and debate on the challenges posed by the SDGs. To this end, six high-level panels were held during the meeting, focusing their analyses on goals 6 (clean water and sanitation), 7 (affordable and clean energy), 11 (sustainable cities and communities), 12 (responsible production and consumption), 15 (life on land) and 17 (partnerships for the goals). In addition, this year a total of 47 states, among them Spain, voluntarily presented their national reviews of Agenda 2030.

One of the key elements of the High-Level Forum is to strengthen political leadership, offering guidelines and recommendations for its member states through the exchange of experiences and training. UNITAR has organised a number of meetings and events at the forum with the aim of presenting the work that each CIFAL centre promotes within its respective scope of action. CIFAL Madrid-RACE was invited to present the road safety training plans and capacity-building activities implemented for professionals in the area of prevention of road traffic accidents.

Among the events was the presentation of the first UN postgraduate Certificate Course in Road Safety Management and Administration, a Private Degree of UNITAR, RACE (through CIFAL Madrid), and Universidad Europea. The course’s four-week academic programme at the Alcobendas Campus has been designed to allow students to learn about the initiatives and work that have reduced traffic accidents in Spain through the experience of 42 professionals from a number of different sectors, such as the Directorate-General for Traffic, the Public Prosecutor for Road Safety, members of parliament and municipal representatives. Also involved are international experts from Portugal and Germany, and bodies such as the FIA Foundation, LatinNCAP and ADAC.

Together with the CIFAL Madrid-RACE Centre, represented by the Club’s Director for Internal Resources, Carlos Lancha, and by the director of the CIFAL Madrid Centre, Antonio Lucas, also present at the High-Level Political Forum for Sustainable Development were the Mayor of Malaga and President of CIFAL Malaga, Francisco de la Torre, as well as the heads of the centres of CIFAL Flanders (Belgium), CIFAL Durban (South Africa) and CIFAL Curitiba (Brazil). Also during the event at the United Nations in New York at which the CIFAL Centres were present, the Assistant General Secretary of the UN and Executive Director of UNITAR, Nikhil Seth, signed the institutional agreement for the creation of CIFAL Bogota, a new centre that joins the CIFAL Global network, which now has 18 headquarters from across the globe.

A video (in Spanish) of the activities of CIFAL Madrid-RACE, which was shown during the event at the UN Headquarters in New York, is available via this link